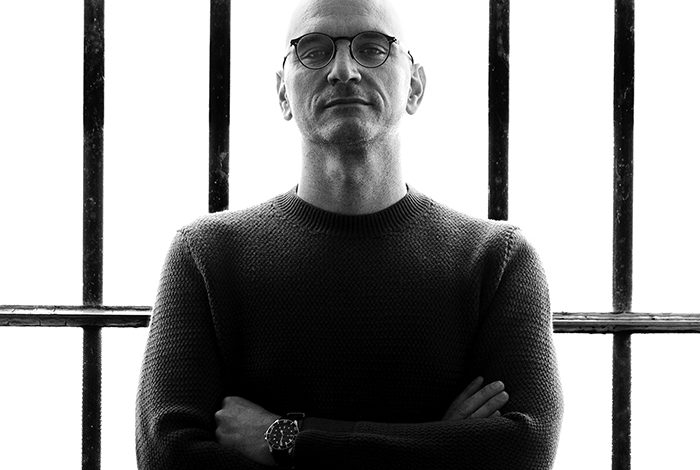 From the ‘houses’ and pavilions, Francesco Librizzi transferred to product design his obsession with space. “Today I like to imagine that it is a significant point of living”.

His works are working on the main characteristics of the space and how this is affected by objects, structures and, above all, by humans. Francesco Librizzi Law architectural space as a succession of empty and full, and decided to also apply to the product that vision, as simple as philosophical. In his career stand out prestigious international awards and special mentions, in addition to excellent architectural projects such as House C House and G, or the preparations for the Italian Pavilion at the XII Biennale of Architecture in Venice (2010) and the Bahrain Pavilion at the XIV Biennial Architecture of Venice two years later. When, in 2016, for the twenty-first Triennial of Milan, by installation of the exhibition “Rooms. New philosophies of living “, the focus is shifted to the spatial qualities of objects giving rise to collaborations with Driade and FONTANAARTE.

Architect overlooking the design: that picture emerges in Italy? Are there any trends?
The architecture scene is very diverse. There is considerable difference between the designers, between generations and between design areas: who does interiors, exhibition design as well, who makes only architecture, and who does both. My generation is the first that has explored the digital probed the potential and it is also known how to free up, opening the possibility of a good study of all the instruments of the discipline, even seemingly outdated as the design. It is also the generation that lived the last part of that phenomenon throughout the twentieth century called ‘modernity’. My generation is the first that has also reopened a dialogue with history, without guilt or ‘sins postmodern’. The consequences of the above are obviously very different depending on the poetry of every professional, but also depending on the variations of the trade. In architecture, this has led to a deeper attention to types and technologies will not be obsessed with modernity. In design and interiors it produced attention to materials, shapes and pre-modern furnishings, able to accept the decoration and quality materials. Today I like to imagine that it is a significant point of space, light and living. The discovery of this for me is to know how to read the space and know then tell.

How did the collaboration with Driade?
I started with Driade presenting a project called ‘I, space, things’. Arriving from the product world, but from architecture. I work in interior design and exhibition design and my experience in dealing with the space allowed me to talk about the product with the company in the most honest way possible. I am a designer of the space, not the object.

“We”, preparation for exhibition curated by Luca Molinari at the Palace of the Museums of Reggio Emilia (2015) – photo Alberto Moncada and “G House”, particularly of the scale in the private residence in Cefalu (2014) – photo by Alberto Moncada

Where do the ideas you have presented at the show?
The first product is pure space, is a series of sets infinite, in which everything is placed on the planes becomes infinite. it’s all a game of full and empty. In homes, the apartments there is only the need to introduce objects, but there are different order of spaces that serve to contain those objects. From this was born the first product, Still Life, and he then all a declaration of intent and the entire collection I designed for them. In general, there is always the desire to live the whole volume without it becoming a bulky mass in space.

As the tables?
Yes correct, but are not limited to that function. They become support scenarios, the type of vacuum they create is much more important than full. The house is one of the most dense space, without being loaded into an aesthetic of disappearance, absence.

Driade has implemented this year a Revolution, he finds himself?
Yes, I think the most beautiful aspect of the design is to do something that everyone knows but who have not yet seen. It is a principle of invention, but it is when you reveal something that has always been there. is the force, for example of contemporary art.

It’s an evolution or a revolution?
Maybe you can define continuity, no consistency but continuity. It is a revolution because for me is the discovery of the scale of magnitude of things and the demonstration that the architecture and design world are not the same, as well as the world of design and art or fashion. They are crosses and twists, but not the same skills. For me it is a new beginning. Let’s see!

“D1” installation for the exhibition “Rooms. other philosophies of living. “curated by Beppe Finessi for the XXI Triennial International Exhibition of 2016 – photo by Andrea Martiradonna and” G House “, the scale seen in the private residence in Cefalu (2014) – photo by Alberto Moncada

This approach also applies to cooperation with FontanaArte?
The deal with them is even more consistent. Being light, it means creating the space with something that exists, but it has no body. With Setareh series, which consists of 5 variants of lamps, I tried to do just this. Light has a presence, just as objects, but I wondered how to make it visible. The solution are very thin frames that radiate light rays, and highlight the path and the presence.

Based on these new partnerships, what are the differences between the architecture and the design market?
The world of design is far more popular, in a technical sense. It that is a much more direct contact with the users of the world. The architecture is confronted with citizens in second place, and over a period of time that can last centuries. The design is confronted with the views of its members in a preliminary, direct. Almost like the systems of government are to the vote of the people, so the design projects base their lives on an immediate consensus that thousands of people express with the purchase. This produces several instant portraits of the world in which we live. This also means that the design is more influenced and influence generates faster. This is why the design market is easier to activate than the architecture.

Which one do you prefer?
I like them both. I am a designer of space, and on different scales likes to understand how we feel everything around us, as we live. The objects significantly affect the space with their presence. it is therefore impossible for me to disregard it and not be fascinated.

Sissi Chair in How To Spend It Magazine

This website uses cookies to improve your experience while you navigate through the website. Out of these, the cookies that are categorized as necessary are stored on your browser as they are essential for the working of basic functionalities of the website. We also use third-party cookies that help us analyze and understand how you use this website. These cookies will be stored in your browser only with your consent. You also have the option to opt-out of these cookies. But opting out of some of these cookies may affect your browsing experience.
Necessary Always Enabled
Necessary cookies are absolutely essential for the website to function properly. This category only includes cookies that ensures basic functionalities and security features of the website. These cookies do not store any personal information.
Non-necessary
Any cookies that may not be particularly necessary for the website to function and is used specifically to collect user personal data via analytics, ads, other embedded contents are termed as non-necessary cookies. It is mandatory to procure user consent prior to running these cookies on your website.
SAVE & ACCEPT